Hip-hop music and culture is deeply rooted in New York City and traced back to the 1970’s as its early beginnings. Some of the most successful rappers had humble beginnings, living in housing projects, growing up with only one parent, and turning to illegal activities for making money. Below is a look at three of the most famous rappers’ homes in New York City’s boroughs, prior to their rise to fame and fortune.

Marcy Houses are subsidized housing in the Bedford-Stuyvesant neighborhood of the New York City borough of Brooklyn. A total of 1,705 apartments are comprised of 27 six-story buildings. Marcy Houses are often referred to as “Marcy Projects” and is infamously known for its high level of drug use and gun violence.

Rapper Shawn Carter, commonly known as Jay-Z, was raised in Marcy Houses in building 524 during his childhood. Over the years, he has referenced the Marcy projects in his music. 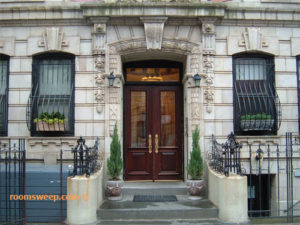 Two miles away from Jay-Z’s childhood home, the rapper Christopher Wallace, commonly known as The Notorious B.I.G., grew up in the Clinton Hill neighborhood of Brooklyn, NY. He was raised by his mother, Voletta Wallace, in a three bedroom and one bath apartment for the first 20 years of his life.

Nas’s first four album covers feature an image of the Queensbridge Houses in the background, which include Illmatic, It Was Written, I Am…, and Nastradamus.

The world of hip-hop music and culture has transformed over the years and continues to evolve. While rap music is credited with beginning on the east coast in New York, we have seen successful rappers and styles of rap music emerge throughout all parts of America. Jay-Z, The Notorious B.I.G., and Nas will forever be a large part of history when discussing rap music and remained beloved by the entire hip-hop community across the world.